Sectors at risk of leakage are defined as those where ETS pricing would increase production costs by at least 5 percent of total gross value added and trade intensity with non-EU countries is above 10 percent. The benchmarks set the amount of free permits for each industrial product. See Delbeke and Vis (2017) for further discussion. Small emitters are allowed to opt out from the EU ETS if they are subject to equivalent measures, in order to minimize administrative costs.

Sectors that are not deemed to be at risk of leakage will receive up to 30 percent free allocations from 2021 to 2026, decreasing linearly to zero from 2026 to 2030. Sectors on the carbon leakage list will continue to receive 100 percent of their allowances up to benchmark levels for free. The benchmark levels will be updated every five years to take technological progress into account.

Crucial for the pace at which surpluses are reduced is the share which is placed in the MSR. This share is set at 24 percent until 2023 and will be halved after that. Currently, the permits in MSR will be placed back into the ETS if surplus falls below a certain threshold. Starting in 2023, MSR reserves in excess of the previous year’s auction volume will be permanently invalidated.

Iceland, Luxembourg, and Norway are allowed up to a limit of 4 percent.

The net fiscal cost of policies is kept at zero every year in the simulations to allow a clean comparison of the economic efficiency of different policy packages.

The model assumes that Iceland, Norway, Switzerland, and the United Kingdom (that is, countries that are currently in the EU ETS) participate in EU climate packages.

Despite high levels of taxation for road transport fuel, fuel prices still appear to be below their economically efficient levels, reflecting multiple negative externalities (Arregui and others forthcoming; Coady and others 2019). Thus, including the transportation sector in the ETS should not be used as an argument for a generalized reduction of existing fuel duties. Fuel duties should only decrease by the amount that was attributed to emission externalities; duties targeted to other purposes such as road congestion or revenue collection should remain in place.

An implicit reserve price already exists in the EU ETS. Article 7(6) of the Auctioning Regulation stipulates that an auction shall be canceled if the clearing price is significantly below the secondary market price. Nonetheless, this system has not prevented the carbon price from being low and volatile.

While the absence of a price floor may provide relief during cyclical downturns, the social cost of emissions is roughly unchanged, so it is not optimal for the carbon price to drop to the extent observed after the global financial crisis.

For example, in 2017, some member states transferred part of their ETS revenue to the industry, ranging from less than 5 percent in Lithuania to 30 percent in France and 50 percent in Luxembourg (EC 2019). These compensations have not always been driven by an economic rationale (Roques and Laroche 2020).

Beyond 2030, carbon pricing revenue would start to decrease as the EU approaches its 2050 goal of net zero emissions, because the revenue base will shrink. Hence, the use of revenue will provide support during the transition, not permanently.

The income losses from a carbon price increase reflect distortions in economic efficiency and transitory frictions in labor and capital markets. Labor market frictions are modeled as rigid wages, and capital market frictions as the inability to reallocate old capital vintages between sectors. In reality, job reallocation frictions may also play an important role. Note that the model does not take into account income gains from avoided environmental damages.

Metcalf and Stock (2020) estimate that the impact on output and employment of carbon pricing in the EU is not statistically significant.

Carbon leakage is defined as the increase in rest-of-the-world emissions caused by an increase in the cost of EU emissions. This can be due to either import substitution or outsourcing of industries.

There is a potential third factor as well. Energy consumption is likely to be reflected fairly accurately in the surveys, but total consumption may be underestimated. Aggregate consumption measured through household survey data is typically smaller than the aggregate final consumption of private households in the national accounts. This is due to several measurement and conceptual issues. An important difference is the imputation of rents for owner-occupied housing and financial services included in the national accounts data. See Eurostat (2020) for details.

Any type of BCA would eliminate only the leakage embodied in trade. It would not address the potential increase in global fossil fuel consumption induced by the reduction in fossil fuel prices due to lower demand by the EU.

Examples of such certification institutions include the World Resource Institute/World Business Council on Sustainable Development GHG Protocol or the ISO 14064 standard.

Note that the label “green” in this context refers to activities that have broadly neutral impact on the environment or help reduce GHG emissions.

See Soderholm and Sundqvist (2007) for renewable energy technologies, Nemet (2012) for wind turbines, and Bollinger and Gillingham (2014) for solar photovoltaic installations.

However, there is a risk that investors without environmental goals undo part of the effect by chasing higher yields in high-emitting companies.

One of the key strengths of the Envisage model is a consistent and complete representation of the global economy, including interactions between different economic agents. Tough the level of the technological details is lower than in energy-system models, and productivity growth is exogenous, energy demand is represented endogenously. Combined with a sufficient level of sectoral details, the model provides a comprehensive framework for a multiregion energy and environmental policy assessment.

The agreement covers three types of gas emissions (carbon dioxide, nitrous oxide, and perfuorocarbons), but the focus here is on carbon dioxide from fossil fuel combustion, which accounts for most GHG emissions.

Real income is defined as the equivalent variation in income derived from the consumer’s expenditure function. It differs from GDP given the geometric aggregation of heterogeneous sectors into a final consumption good via a nested CES function.

The tool simulates the use of fossil fuels in three sectors (power generation, road transport, and “other energy”) until 2030, assuming a fixed energy supply. Energy demand is mainly driven by income growth, which is exogenous, and energy prices, which increase with a carbon tax.

This is achieved by assuming costs decline by 13 percent for wind power generation, by 35 percent for solar power, and by 18 percent other renewables from 2014 to 2030.

This baseline is not directly comparable to the EU Reference Scenario (EC 2018b), which includes policies to achieve legislated targets, including on renewable shares and energy efficiency, and thus implies a faster emission reduction.

All prices are expressed in 2019 euros. By assumption, nuclear energy and hydro power are not allowed to grow in the simulation.

This estimate likely underestimates the income loss from a lack of full emissions trading, because the stylized scenario allows for trade between ETS and non-ETS sectors within a country, and between different countries in a country group (such as Eastern Europe). On the other hand, it does not allow for trade in ETS sectors between country groups.

Note that a comparison of the estimated carbon prices across different models is complicated because the prices depend on the assumed baseline (among other things). For example, the model developed by Parry and Mylonas (2018) calculates a higher carbon tax of €78 per ton of CO2 in 2030 needed to achieve the EU goals, but that model has much smaller reduction in emissions in the baseline (about 25 percent compared to 33 percent in the baseline used in this paper).

The latter implies a €120 increase in the annual electricity bill for an average EU citizen (given 2014 electricity consumption values).

A well-known result in public economics is that the welfare deadweight loss from taxation is more than proportionally increasing in the tax rate (Ramsey 1927). Parry and Bento (2000) provide empirical support for the result that labor taxes can be more distortionary than carbon taxes, as labor taxes distort not only labor markets but also the choice between ordinary and tax-preferred spending (for example, on housing, fringe benefits, informal production).

Such a subsidy rate leads to an expansion of the renewable energy share to 73 percent in Germany, which is slightly above its national target of 65 percent.

For a fairer comparison with the labor tax scenario, an alternative scenario where labor taxes are lowered by the same amount as the renewable subsidy is run (not shown). Even in that case, cutting labor taxes generates a more benign income impact, as the current labor tax rates are more distortionary than the effect of higher energy prices.

The Envisage sectoral aggregation does not provide the granularity needed to model these policies explicitly. However, the model by Parry and Mylonas (2018) does not calculate the full general equilibrium effects on macroeconomic variables. In the latter model, the increase in carbon price is relative to a baseline with no new or tightening of existing policies beyond those implicit in recently observed fuel use.

This range would be even wider if all individual countries were disaggregated in the simulation.

In the simulation, carbon exports are not exempt from carbon pricing, although this could be modeled as well (see section in the main text).

This scenario illustrates the efficiency gains from global carbon emissions trading. A practical global solution should take other factors into consideration as well, such as level of economic developments and mitigation possibilities, and may involve different targets for different countries. 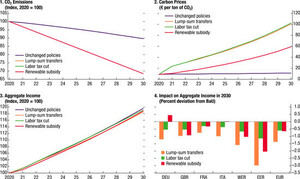 Note: Carbon prices are in 2019 euros and calculated as the economy wide average. For the “Unchanged policies” scenario, the variables income and unemployment are expressed as the cumulative percent growth relative to 2020. For the rest of scenarios, these variables are expressed as percentage point differences with respect to “Unchanged policies” in 2030. Carbon leakage is defined as the emission increase in the rest of the world relative to the decline in EU emissions. Cross-country standard deviations are calculated over the percentage impact in each scenario relative to the baseline. The renewable share is computed over energy production but excludes most of the energy produced by biofuels and biomass, which makes the share smaller than the value reported by Eurostat. BaU = ???; EU = European Union; NA = ???.