Jump to Content Jump to Main Navigation
Rules or Fear? Tracking the Early Economic Impact of COVID-19 and Mitigation Policies

The Fall/Winter 2020 issue looks at the economic effects of the COVID-19 Pandemic on society and the economy.

The Fall/Winter 2020 issue looks at the economic effects of the COVID-19 Pandemic on society and the economy.

IS IT OVER YET

More than nine months after the World Health Organization (WHO) officially declared COVID-19 a pandemic, infection rates remain high in the United States and various European countries. Several governments are facing difficult decisions as to enforcing new lockdowns or other milder non-pharmaceutical interventions (NPIs) to once again “fatten the curve.” Policymakers therefore must understand the economic and social costs of NPIs. In particular, they need to discern whether the economic impact of COVID-19 is primarily driven by voluntary social distancing by individuals—the fear element—or by the implementation of mitigation policies—the rules element. The first half of 2020 can provide some guidance as to implementing the appropriate kinds of rules (and when) and managing expectations to influence people’s behavior.

A recent IMF study uses several high-frequency indicators—such as electricity usage, smartphone movements, and employment for small businesses and hourly workers—to track people’s mobility and economic activity since the COVID-19 outbreak and around the reopening phase, both across US states and in Europe.

The study shows that the contraction in economic activity is strongly associated with the severity of the health crisis and with the observed decline in mobility, which reflects both voluntary and mandatory social distancing. In contrast, the relationship between NPIs and economic contraction is weaker. This evidence suggests that NPIs are only part of the story, and perhaps not the most important. Compliance and voluntary social distancing matter a great deal. Sweden’s experience aligns with this evidence; it adopted relatively less strict mitigation policies, but many of its residents have been practicing social distancing by choice. Sweden’s observed decline in economic activity, consumer spending, and mobility is only slightly smaller than in neighboring countries.

The lifting of mitigation policies in many countries and states provides additional evidence about the role of NPIs and voluntary social distancing (Figure 3). US states that have allowed nonessential businesses to reopen since late April witnessed a gradual recovery of mobility and economic activity starting about two weeks before the reopening. A similar picture emerges from analyzing the easing of NPIs in European countries. These findings suggest that, in the reopening phase, people’s behavior matters more for the resumption of activities than does the timing of the reopening.

Overall, the study finds that the impact of COVID-19 on the economy is primarily due to the way it affects people’s willingness to actually go out to work and spend, whereas the formal adoption (or lifting) of NPIs has less of an impact. This implies that the economy may not rebound unless workers and consumers feel safe about resuming their normal activities. These findings suggest that avoiding or delaying NPIs may not fully shield an economy from the pandemic shock. Moreover, lifting mandatory lockdown measures—especially when the health crisis is not under control—may not have the expected effect on economic activity, as people would continue to voluntarily limit their mobility. This is a reminder of the importance of preserving the trust of citizens toward health authorities, by ensuring that restrictions are kept in place if necessary and only lifted when appropriate. The study also shows that, although COVID-19 is a truly global shock, regions and countries where the outbreak is more sizable experience significantly larger economic losses. This finding underlines the importance of prevention, early response, and other health measures in containing the outbreak at both the local and national levels, as communities where the virus circulates to a lesser extent are also spared the most adverse economic impact of the pandemic.

COVID-19, NPI Timing, and Mobility in Europe Versus the United States 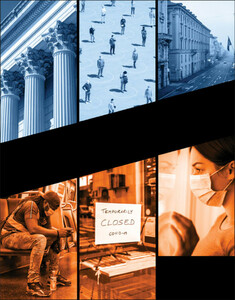 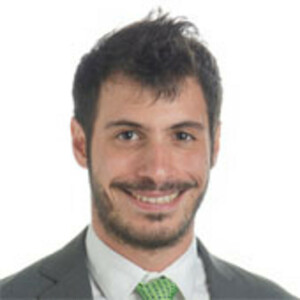 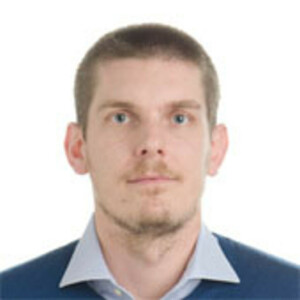 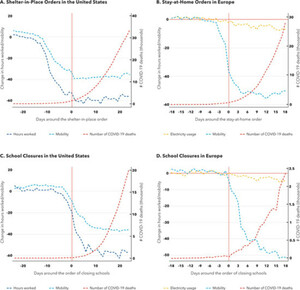 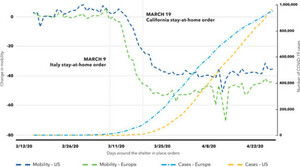 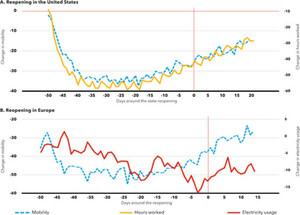