Maritime trade has formed the backbone of economic prosperity from ancient times to the globalized 21st century. Until recently, it was almost impossible to accurately track the plethora of shipping routes-big data and new technologies allow us to do so now and to derive real-time information on the state of the global economy.

In 2018, about 80 percent of global trade by volume (more than 70 percent by value) was shipped by sea, according to the United Nations Conference on Trade and Development. Modern technology allows us to monitor the global movements of these ships using the automatic identification system (AlS)-a maritime safety communication system for international vessels. All major commercial ships (over 300 gross tons) are required to install a device that emits a radio signal, indicating the ship’s identification number, position, speed, and other safety-related information about the ship’s course. These devices transmit a signal every few seconds, generating a continuous flow of information about shipping traffic.

What if this massive amount of realtime data on vessel traffic could be used to track the movement of goods across the globe? What are the benefits and challenges of using big data to produce real-time information about trade? In what ways can countries use this source to complement traditional sources of trade statistics?

To answer these questions, a team of IMF economists employed a more structured version of the AIS data, containing “port-calls data.” Port-calls data combine ship positions and port boundaries to track the arrival and departure of ships in a port. The economists used Malta-an island state in the European Union, with a population of about half a million people-as a case study. Malta is very

open to international trade, relying heavily on imports of industrial and consumer goods, most of which arrive by sea. The sample data for Malta for the purposes of this research came from MarineTraffic, one of the largest providers of AIS data in the world.

The IMF study proposes a two-tiered approach to a new trade index:

First, only port calls of ships involved in international trade are identified. The number of filtered ships tracks the movement in the official figures for port visits in Malta’s maritime statistics relatively well (Figure 1) but is, interestingly, consistently higher than port statistics. On the one hand, the higher level of AIS data may indicate that these data record multiple visits of the same ship or ships that may only be passing through the port. On the other hand, it is also a sign of exhaustive coverage of maritime traffic recorded in official statistics.

From Ship Loads to Trade Volumes:

Next, the study proposes a methodology to estimate the volume of goods exchanged in the port, based on AIS information on the maximum carrying capacity of the vessel (its “deadweight tonnage”) and changes in its cargo load (proxied by its “draught”) before and after its port visit. The strong correlation with official trade data is striking (Figure 2).

These results suggest that it may be possible to track international trade in real time using AIS data on vessel traffic. This new trade index would not supplant but supplement traditional statistics on trade by providing fast readings and greater detail on international trade movements.

It may be of particular value for countries with relatively weak statistical capacity to capture trade flows in a timely way. The index would therefore help identify the turning points of the economy much faster and generate early warning signals of a trade slowdown.

These findings have important implications for policymaking. International trade represents a significant share of GDP in many countries, particularly in small states with open economies. Tracking a country’s trade in real time may offer quick and valuable insight into the health of an economy. The methodology applied for Malta can easily be extended to other countries, particularly those with a sizable share of trade carried by ships. Going in this direction, the IMF team covering Kiribati-a small and fragile state with one of the largest ocean territories in the world-plans to use the methodology in the forthcoming checkup of the country’s economy. At the global level, AIS data offer great potential for observing world trade flows on a real-time basis, thereby greatly improving the monitoring of global trade patterns.

Technology is offering several new big data sources, such as high-frequency vessel traffic data. We live in an era of a continuously evolving and expanding ecosystem of data and statistics. And data are much more accessible than in the past. The challenge is for policymakers and private entities to learn how to transform big data into high-quality statistics and use them to make better decisions. 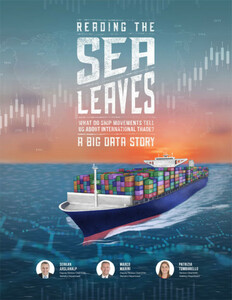