Jump to Content Jump to Main Navigation
Our Commmon Energy Future: What Do 167 Years of Data Say?

The consumption of energy services—heating, lighting, transportation, and the like—is essential to the functioning of modern economies. At the same time, since most energy for these services is supplied by fossil fuels, our high energy dependence triggers a multitude of environmental externalities, with climate change being the “greatest and widest-ranging market failure the world has ever seen” (Stern 2006, i). To curb carbon emissions, the world must reduce its consumption of fossil fuels. This could in principle result from an early saturation of total global energy consumption and/or acceleration of the ongoing energy transition toward low-carbon energy sources, such as nuclear, wind, and solar.

Energy-saving technologies, however, can push the energy saturation point forward by shifting the energy-income curve down, since provision of the same energy services requires less energy over time. Our findings show that, on average, energy efficiency improved approximately 1 percent between 1971 and 2015 (Figure 2). If we assume that global energy efficiency continues to decrease at its recent historical rate, we estimate, albeit with a substantial degree of uncertainty, that the saturation point will decline to about $87,000-already reached or close to being reached for some advanced economies. Currently, for example, it would take Germany only 33 years to get there.

The future of global energy consumption, then, depends largely on how low-income and middle-income countries will shape their energy systems. As of 2015, only 18 percent of the world’s population had attained per capita energy consumption of 120 gigajoules a year-the bare minimum for a human development index score of 0.9, commensurate with the average Organisation for Economic Co-operation and Development economy (see Smil 2017, 416–17).

So global energy consumption driven by emerging markets is unlikely to saturate soon. Even in China, where energy consumption has grown more rapidly than it has anywhere else since the turn of the century-causing a boom in global commodity prices during the 2000s and a sharp and troublesome rise in domestic air pollution-energy consumption, according to the World Bank World Development Indicators, is currently only 93 gigajoules per capita.

Thanks to continued efficiency gains, developing economies may leapfrog and saturate at lower income levels, which would help bring down the expected path of global greenhouse gas emissions. This scenario is uncertain, however, for several reasons. First, van Benthem (2015) finds little evidence of energy leapfrogging in the recent past: developing economies in 2006 grew at equal energy intensity as industrialized countries in 1960. This finding may in part reflect “rebound effects” (see Jevons 1865) through which some direct gains from higher efficiency are undone by increased energy consumption as a result of lower prices for energy services.2 Earlier survey studies by Greening, Greene, and Difiglio (2000) and Sorrel (2009) are more skeptical, however, and find only small to moderate rebound effects.

Second, the falling income elasticity of energy consumption may depend on several other trends related to high income levels. These include outsourcing of energy-intensive production to developing economies, urbanization and structural change toward a service economy, electrification, and weaker aggregate consumption as a result of higher inequality. Some of these trends may be impossible to replicate or sustain at the global level (for example, someone must produce steel and mine cobalt).

The future energy saturation path of fast-growing emerging markets is paved with uncertainty, but there is hope. Changes in the global energy mix could increase the chance of timely mitigation of climate change. However, current mitigation pledges in nationally determined contributions-which are voluntary-even if fully implemented, would be consistent with a 3°C warming target, relative to preindustrial levels, rather than the 1.5–2°C target of the Paris Agreement. A quicker transition to a less-carbon-intensive energy mix is thus needed.

Policymakers are hoping that green investment will accelerate and will pick up the slack. Over the past few years, renewable energy has captured more than two-thirds of global investment in new generation capacity. This rapid growth came in part from the fact that, aided by regulatory pressure, technological innovations and learning by doing have substantially reduced the cost of wind and solar energy-once considered uneconomical. Further cost reductions are needed and appear feasible, at least for now. Take solar energy: for more than two decades the economics of solar have followed a predictable pattern-or learning curve- and costs have fallen 20 percent every time cumulative production has doubled. To ensure that positive learning externalities are fully internalized, government support remains imperative. Furthermore, eliminating fuel subsidies and increasing carbon taxes could substantially speed the transition by raising energy prices to reflect their true social costs.

Policymakers must also consider the temporary drawbacks to a successful transition. For example, some coal assets, such as coal-fired power plants, could become obsolete, and high-cost oil reserves could become unrecoverable (especially with acceleration of electric vehicle adoption). Or the transition may negatively affect pension funds whose balance sheets are highly exposed to these assets. To address the risks of stranded assets, countries and actors with high exposure to fossil fuel industries should seek diversification and stimulate the development of carbon capture technology.

A full analysis spanning the period 1850–2017 will appear in a forthcoming IMF working paper.

The discrepancy between our results and those of van Benthem (2015) can be explained by noting that he focuses on efficiency of end-use technologies, whereas our analysis also captures gains in fuel conversion efficiencies. 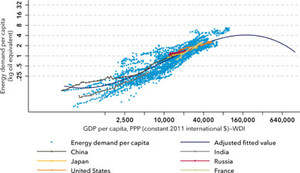 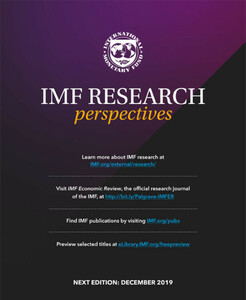