It is proposed to extend the period of higher access limits for emergency financing for a period of six months, through April 6, 2021.

It is proposed to extend the period of higher access limits for emergency financing for a period of six months, through April 6, 2021.

1. In response to the outbreak of the COVID-19 pandemic, the Fund temporarily increased access limits under its emergency financing instruments for an initial six-month period. With many emerging market and developing country (EMDC)1 members facing urgent balance of payments (BoP) needs, the Executive Board, on April 6, 2020 approved a temporary increase in access limits under the exogenous shocks window of the RCF and the regular window of the RFI—in each case, from 50 to 100 percent of quota for annual access, and from 100 to 150 percent of quota for cumulative access.

2. Other reforms also allowed the Fund to respond to members’ urgent financing needs at an unprecedented scale and speed. These included: (i) streamlined procedures to accelerate Board consideration of member requests for emergency financing; (ii) an increase in the normal annual access limits from 145 to 245 percent of quota for the Fund’s General Resources Account (GRA) and from 100 to 150 percent of quota for the Poverty Reduction and Growth Trust (PRGT) through April 6, 2021; and (iii) a temporary suspension of the limit of two RCFs disbursements per year. These reforms have facilitated the provision of emergency Fund financing by the Fund to 69 members through August 31, 2020.

3. The temporary increases in access limits under emergency financing are set to expire on October 5, 2020. The Executive Board, in approving the higher access limits, asked that the case for extending the limits for a longer period be examined one month prior to their expiration (), i.e. on September 5, 2020.2

4. Exceptional demand for Fund financing is expected to persist well into 2021. For many EMDCs, prospects continue to remain precarious despite a slight improvement in the global growth outlook in recent months. The persistence of distressed economic conditions into 2021, along with elevated uncertainty, can be expected to result in continued high demand for Fund financial support, including through the emergency financing instruments in a significant number of cases.

5. This paper proposes extending the duration of the current (higher) limits on access to emergency financing for a further six months. An extension will provide the Fund with greater flexibility to respond to the urgent BoP needs of members in situations where an upper credit tranche-quality (UCT) program is not feasible. The next section discusses use of the emergency financing instruments since the onset of the pandemic, followed by staff proposals to extend the duration of higher access limits for the emergency financing instruments. The paper also discusses the resource implications for the GRA and the PRGT. It concludes with issues for discussion and proposed decisions for adoption by the Executive Board.

7. As of August 31, 2020, 69 members had received financial support through the Fund’s emergency financing instruments since the outbreak of the pandemic, totaling SDR 21 billion (US$29 billion).3 Specifically, support provided to address urgent BoP needs under the regular window of the RFI and the exogenous shocks window of the RCF has been as follows:

In addition, 19 countries have requested but not yet received emergency financial support, including 16 first-time requests and three second-time requests.

8. Use of the emergency financing instruments has, unsurprisingly, been more common among poorer and fragile countries. One-half of PRGT-eligible members and slightly over one-half of fragile and conflict-affected states (FCS) received support, as compared with about one-quarter of the rest of the Fund membership. Of the 69 members that received Fund support through the RCF and/or RFI as of August 31, 2020, 22 are classified as FCS by the Fund.

9. Some three-quarters of the countries receiving financing under the emergency financing instruments have benefited from the temporary doubling in RCF/RFI annual access limits. Since April 6, the Board has approved emergency financing requests that involved access in excess of 50 percent of quota—the annual access limit under both RFI and RCF in place before the temporary increase—for 53 of the 69 countries who received assistance. Of these 69 members (Annex):

10. One-third of the countries that received support through the emergency financing instruments had a Fund arrangement in place when this support was provided. For these 23 countries, provision of new support through an augmentation of access under the arrangement was deemed not feasible, given the urgency of financing needs and the expectation of difficulties or delays in completing the next program review.

11. Emergency financing requests have generally contained governance commitments to help ensure that resources are used for their intended purpose. Since emergency financing is provided through outright disbursements, the RCF and RFI do not provide for ex post conditionality to help safeguard appropriate use of the financing. In order to ensure transparency and accountability, recent RCF and RFI requests have typically included governance safeguards in the form of audits and procurement-related commitments by the authorities (as described in Box 2). Such safeguards are considered “best practice” in emergency financing requests, although other commitments may feature in response to country-specific circumstances.

12. Economic prospects remain precarious in many EMDCs. While it is expected that members will increasingly seek support through UCT arrangements as the pandemic abates, such arrangements may not be feasible in a significant number of cases. An extension of higher access may be justified in giving the membership an additional period to address urgent BoP needs arising from the pandemic, where support under Fund arrangements is not feasible.4

13. Extending the period during which the higher access levels to the RCF/RFI are in place would benefit three distinct groups of member countries:

15. The impact of the extension of the temporary increase in access limits on GRA resources would likely be modest, subject to continued heighted uncertainty due to the pandemic. Through end-August, the Fund has disbursed SDR 15.6 billion through the RFI (standalone or in a blend with the RCF). As noted above, the number of countries that have already accessed the RFI and have remaining borrowing space is relatively limited. However, should the economic outlook worsen, total potential RFI-related demand for GRA resources could reach some SDR 57 billion (including the amounts already disbursed), if more large EMs that have not requested assistance to date were to make emergency financing requests.

17. The impact on the demand for emergency financing under the RCF of a six-month extension is expected to be contained. Staff analysis suggests that the extension could modestly increase projected demand based on actual requests for RCF support, as countries would now have more time to resolve outstanding issues and finalize their requests. The extension could also encourage some countries to temporarily delay requests for multi-year arrangements or even cancel ongoing arrangements. This timing effect may change the financing mix but is unlikely to have any major impact on the overall demand projections.

18. Accordingly, the extension is unlikely to significantly impact PRGT loan and subsidy resources. The ongoing loan mobilization campaign has already secured over SDR 15 billion in effective loan agreements and formal pledges from 13 donors, well in excess of the SDR 12.5 billion target. This will provide sufficient resources to accommodate the surge in crisis-related demand by low-income countries for Fund financing, supported by the temporary increase in PRGT and RCF access limits. However, there is a need to ensure sufficient subsidy resources to preserve the PRGT’s self-sustainability. A comprehensive funding strategy for the PRGT will need to be discussed with the Executive Board in the period ahead.

Do Directors agree that exceptional demand for Fund emergency financing is expected to persist well into 2021?

Do Directors agree that the temporary increase in annual and cumulative access limits under the RCF and RFI should be extended for six months?

The following decisions, which may be adopted by a majority of the votes cast, are proposed for adoption by the Executive Board:

Decision I. Amendment to the PRGT Instrument

Summary of Key Aspects of Qualification for Emergency Financing

Financing through the RCF/RFI is provided without ex post conditionality. It is made available in the form of an outright disbursement/purchase, with repeated use possible based on urgent BOP needs caused primarily by exogenous shocks or 6-monthly track records of adequate macroeconomic policies. Approval requires ex ante policy undertakings by the member outlined in a letter of intent on the general policies the member plans to pursue to address its BOP difficulties and its intention not to introduce any measures and/or policies that may compound its BoP difficulties. Prior actions could also be established, where warranted. As with all Fund financing, the access level in individual cases would depend on the scale of the BoP need, the assessment of the member’s capacity to repay, the member’s outstanding Fund credit, and its record of using Fund resources in the past. The access for each member that qualifies for assistance under the RCF shall also take into account the size and likely persistence of the shock.

Emergency financing during the COVID-19 pandemic has been justified on the basis of the urgent BOP needs arising from the impact of crisis and satisfaction of other qualification requirements. The choice of emergency financing instead of support through a UCT arrangement has typically been justified on the basis that the urgency of BOP needs has called for financial assistance before a UCT-quality program can be put in place (or a review completed under an existing program).

1/ UCT conditionality standard implies that the authorities have the commitment and capacity to implement a set of policies that is adequate to correct external imbalances and enable repayment to the Fund.2/ Qualification for the RCF requires that the BoP difficulties that underlie the financing need are not predominantly caused by a withdrawal in financial support by donors.3/ For RCF-RFI blends, purchases under the RFI count towards the applicable RCF annual and cumulative limits.

Policy commitments in emergency financing requests (RCF/RFI) seek to limit the risk of misuse of Fund resources. Catastrophes create opportunities for corruption, exacerbated by weaker controls. Such misuse of resources undermines the effectiveness of a government’s relief efforts; it also reduces the willingness of external donors to provide support to the government, and the member’s capacity to repay the Fund.

To reduce the risk of corruption, authorities commit to governance safeguards in their Letters of Intent (LOI). While measures are tailored to country-specific circumstances, two commitments are especially common:

Governance and anti-corruption measures are also included where warranted in countries’ multi-year financing arrangements. This work is part of the ongoing implementation of the 2018 Framework for Enhanced Engagement on Governance, to address longer-term structural issues that underpin poor governance and corruption.

1/ Since the onset of COVID-19, governance-related prior actions have been included in [3] emergency financing requests (Ecuador, Liberia, and Papua New Guinea).
1

For the purpose of this paper, EMDC members are defined as the 189 IMF member countries excluding 35 advanced economies.

Completion of this paper was delayed by competing work pressures.

As noted in Box 1, a UCT-quality Fund supported program is not considered feasible when the member is unable to design or implement such a program due to the member’s limited policy implementation capacity, or when the urgency of the BoP need calls for financial assistance before understandings can be reached on an arrangement to address the member’s longer-term needs.

(in percent of pre-COVID projections) 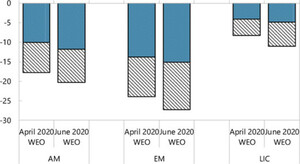 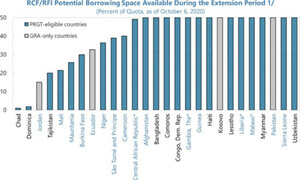 Use of emergency financing from March 1 to September 1, 2020; excludes support under the Flexible Credit Line.