This statement provides information that has become available since the staff report was finalized. This information does not alter the thrust of the staff appraisal.

2. Monetary aggregates continue to signal a bottoming out. Net international reserves reached US$1.4 billion (US$229 million annual increase) in December 2019, corresponding to a gross international reserve coverage of 5.2 months of non-maquila imports. The accumulation of reserves reflected higher external disbursements and lower pressures in the FX market. Likewise, monetary base and broad money increased by 21 and 4 percent, respectively (compared with – 20 and -19 percent in 2018). Bank credit to the private sector contracted by 18 percent annually during 2019 (from US$4.3 billion in December 2018 to US$3.5 billion in December 2019), but the rate of contraction has significantly diminished since last September. In December, the central bank reduced the reference rate by 50 bps to 4.75 percent.

4. Minimum wages raised by 2.6 percent starting on March 1. After keeping minimum wages frozen in 2019, the commission in-charge of setting minimum wages (composed by representatives from the government, workers, and employers) decreed a rise in minimum wages for nine economic sectors —the exception being wages in the free-zone industrial sector, where a separate process resulted in an 8.2 percent increase in January. This increase is estimated to reach at least one-hundred-thousand workers (about 14 percent of total formal employment) for which minimum wages are binding. With projected inflation of 4 percent for 2020, minimum wages in real-terms are expected to fall for a second consecutive year, consistent with staff projections 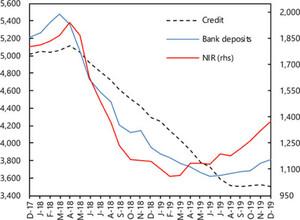