Djibouti has engaged in many large-investment projects to reinforce its port capacities and to catch-up with some of its infrastructure gaps. The debt financed investment program can bring about higher economic output, but it also exacerbates fiscal and external debt vulnerabilities when the country is already at high risk of debt distress. This note studies the implications of scaling up public investment on debt sustainability and growth when the government is subject to inefficiencies on the spending and revenue side. A baseline scenario, based on the staff report projections, is compared to a high investment scenario. The simulations show that the success of investment projects in terms of sustainability and growth depends largely on improving the efficiency of public management, investment returns and the readiness of the government to raise taxes. In presence of inefficiencies, the high investment profile does not generate significantly higher growth than the baseline scenario and public debt becomes unsustainable.

1. In recent years, debt financed investment has been the main driver of growth and economic activities in Djibouti. The country has been essentially dependent on the port activities and the transportation sector. Diversifying economic base remains difficult given that the country lacks natural resources and agriculture and industrial sectors are almost non-existent. Consequently authorities have continued to welcome new investment projects for expanding the port and transportation sector. Investment is expected to reach more than 60 percent of GDP in 2015 in contrast to 44 percent a year earlier. Main investment projects include a railway, water pipeline, construction of new ports and expansion of the existing ones.

2. Djibouti has contracted non-concessional borrowing for public investment, as have many other African countries in recent years, although most of these countries have lower debt-to-GDP ratios than Djibouti. The main public investment projects are the Djibouti-Addis Ababa Railway with a total cost of $570 million and the Djibouti-Ethiopia water pipeline with a cost of $339 million. Both infrastructure projects are externally financed. Authorities consider these projects vital to reduce poverty and unemployment. However, these projects—which are very large investments compared with the small size of the economy—will aggravate the fiscal and debt external debt vulnerabilities when the country is already facing a high risk of debt distress. The fiscal deficit is expected to reach 16.8 percent of GDP in 2015 and the nominal PPG debt is projected to hit 80 percent of GDP in 2017. Strong growth and fiscal reforms are therefore necessary to generate enough resources for the government to service its debt.

3. The impact of investment projects on growth has not been carefully evaluated and there are questions that these investments can reduce poverty and unemployment. Many recent projects are capital intensive with little domestic job creation. For the investment program to generate inclusive growth and employment in a sustainable way, the business environment needs to be improved. Reducing the cost of utilities, improving the labor supply skills, promoting financial inclusion, reducing corruption and enhancing the efficiency of the judicial system are among the most important factors to ensure sustainable growth in Djibouti

5. The model proposed in Buffie et al (2012) provides a framework to analyze the benefits of higher public investment and higher growth versus its cost in terms of higher public debt. The goal of the model is to analyze in a comprehensive framework the relationship between the induced growth from higher economic investment and the debt sustainability taking into account the capacity constraints. This is to address two criticisms toward the DSF: First, it does not take into account the relationship between public investment and growth, and second, the DSF does not treat the fiscal policy in a forward-looking framework with the possibility of major correction when the country faces a shock. Indeed, in Djibouti, public projects will take time to repay and meanwhile all the debt thresholds will be breached. But prescribing that the country should abandon its investment plans because of debt sustainability risks depends on absorptive capacity, efficiency of public spending, and the authorities’ ability to adjust taxes and spending.

6. The model provides a stylized representation of a dynamic stochastic general equilibrium small open economy which includes concessionary as well as non-concessionary public debt and multiple taxes and spending. The model’s features are as follows:

8. Access to commercial debt market can smooth the transition dynamic associated with the public investment scaling up. In the absence of external commercial borrowing, as shown in Figure 3, the tax rate should exceed 60 percent to sustain the public investment level at 15 percent of GDP.2 On the other hand, when commercial borrowings supplement concessional borrowings, it can help with the adjustment. In this case, the tax rate will increase to reach 20 percent and will decline until growth finally generates enough revenue to reconcile repayment of commercial debt.

10. The baseline scenario with low return on infrastructure projects, declining efficiency of public investment or delayed tax adjustment illustrates the danger of a pronounced debt-financed public investment. In each case, the public debt level exceeds 80 percent of GDP and the high risk of debt distress persists for more than 20 years. In case of delayed fiscal policy adjustment, the growth and consumption do not decline comparing to the baseline, but in turn, the country becomes more indebted and the high level of debt persists for a longer period of time.

12. Efficient public management together with public enterprise and structural reforms play an important role in the country’s investment plans. The contrast in Figures 4 and 5, especially for lower efficiency of public investment and delayed tax rate adjustment, illustrates the gains from enhancement of fiscal policy, business climate and the government’s investment management capacity. In face of higher public investment, a reactive fiscal policy would raise the tax rate and look for new sources of financing to preserve the long-run fiscal sustainability (blue graphs). However, as shown in all simulations, the higher tax levels will suppress private consumption under both baseline and high investment scenarios.

14. Public investment and project appraisal helps ensuring that investments are selected based on development priorities. Efficient investment requires sound decisions in the selection of projects. Also because of the multi-year nature of investment projects, a medium-term framework that translates fiscal objectives into credible plans for sustainable investment program is necessary. The execution phase can be particularly affected by an inefficient budget execution and weak procurement practices. Last but not least, after the implementation of projects, an ex-post evaluation of projects by general auditors should be reported.

The path of concessional debt is exogenous in the model. 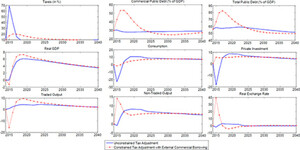 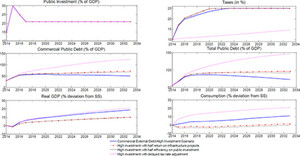