Mobile Payments in the Waemu1

With relatively high mobile phone penetration and a large market for cross-border payments in the WAEMU, the expansion of mobile payment services offers a significant opportunity to increase the region’s financial inclusion. This note first benchmarks the stance of mobile payments in the WAEMU to countries, such as Kenya and Tanzania. It highlights transaction costs, issues of network interoperability, and legal and regulatory barriers as possible constraints to the market’s development in the WAEMU. An overview of oversight issues on mobile payments provides the key pillars necessary to safeguard stability: minimum market entry requirements, financial integrity controls, funds safeguards, and payment stability.

1. As conventional financial infrastructure is still limited, but mobile phone penetration is high, mobile payments could boost financial inclusion in the WAEMU (Figure 1). Financial access in the WAEMU remains low: only about 13 percent of the population has deposits at a commercial bank, less than one third of firms access credit, and payment methods, such as checks, the use of credit and debit cards, and electronic payments in general are much less developed relative to benchmark countries (preceding note). However, while direct contact with financial infrastructure remains low, in particular for the most vulnerable parts of the populations, mobile phone penetration has increased rapidly in the WAEMU over the last decade. In some WAEMU countries, it even exceeds mobile phone penetration in countries which have pioneered mobile payments, such as Kenya and Tanzania. The development of mobile financial services could thus serve as a means to increase financial inclusiveness.

2. The market for mobile payments in the WAEMU appears large, in particular for cross-border payments, and has increasingly attracted operators in the last few years (Figure 2). In addition to a large unbanked population, the magnitude of remittances in the region suggests a substantial market for cross-border mobile payments. Providers appear to have responded to the large demand in the region, as the number of mobile payment operators has more than doubled since 2010, with most of the providers now operating in Côte d’Ivoire and Senegal.

3. A series of initiatives have been taken by the BCEAO to promote the mobile payment sector in the last decade. In order to promote the use of non-cash payment instruments, the BCEAO has enacted an e-money law in 2006 requiring financial institutions to make full use of electronic money. In 2012, to unlock the mobile money market, it embarked on an extensive assessment process: (i) visiting other countries in which mobile payment services are more successful, such as Kenya and the Philippines to draw lessons from their approaches; (ii) hosting a regional consultation conference to explore how to develop further mobile money across WAEMU, such as streamlining the licensing process, avoiding increases in minimum capital requirements, allowing greater simplification of account openings, and developing financial education programs for the wider public; and (iii) undertaking a study to gain a more informed understanding of how citizens use formal, semi-formal and informal financial services.

4. The volume of mobile payments has grown recently but remains lower than in benchmark countries, especially for the most vulnerable parts of the population. Mobile payments have expanded rapidly over the last years: In the period between December 2013 and September 2014, the number of existing accounts has increased by 35 percent to 17 million. In the same period, the number of transactions has increased by more than 40 percent to almost 179 million and a transaction value of 2,445 billion FCFA (about 5 percent of 2014 GDP). However, the usage of informal channels of cash based money transfers remains dominant, and the provision of mobile financial services has been far lower than in benchmark countries, such as Tanzania and Kenya. Latest available indicators suggest that mobile payments have been less accessed by the more vulnerable parts of the population, such as the bottom 40 percent of the income population, the population living in rural areas, or females (Figure 3).

5. This note. First, the note points to possible impediments to mobile payments in the region. It then highlights the essential pillars to safeguard stability in the mobile payments sector.

B. Possible Impediments to Mobile Payments in the WAEMU

6. The following factors may be impeding the development of the mobile payments sector in the WAEMU:

The fast spread of M-Pesa after its introduction in Kenya in 2007 has helped reduce transaction cost, facilitated personal transaction, and contributed to the use of services of financial intermediaries. Based on IMF (2012), this box summarizes the main determinants of M-Pesa’s success as well as risk management issues.

Determinants of M-Pesa’s success. While a rapid expansion in the use of mobile phones has contributed to the success of the developments of the sector, the following structural factors have likely made it possible:

Risk management issues. Advice for risk-prevention for M-Pesa by the Fund and actions taken included:

7. Mobile payment services promote financial inclusion, but they carry a number of risks which may be mitigated by an oversight framework with the following components:

8. Subject to a strong oversight framework, the development of mobile financial services in the WAEMU should be promoted further. Mobile payment services have been picking up in WAEMU, but there is potential for a further expansion. Policies should be targeted at reducing cost, in particular for small transaction amounts. Policies which favor the expansion of interoperability between networks could further open the market for cross-border payments. To safeguard stability, such development of mobile payment services should go hand in hand with measures to strengthen the oversight framework.

WAEMU: Provider if Mobile Payments in the WAEMU

WAEMU: Mobile Service Provided in the WAEMU, Kenya and Tanzania 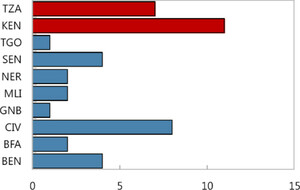 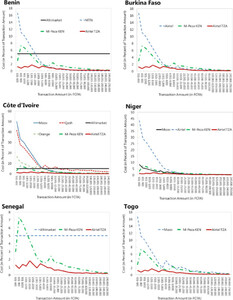 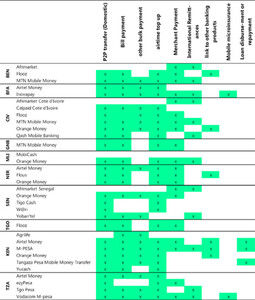