The current account deficit declined in 2014. While gross international reserve coverage has increased slightly, part of the current account deficit has been financed by a decline in commercial banks’ net foreign assets. Contingent on the implementation of government’s consolidation plans, and helped by a favorable oil price outlook, the current account deficit would further gradually decline and be matched by sufficient financial inflows in the medium term. According to various metrics, the real exchange rate appears to be broadly aligned with fundamentals. International reserve coverage should increase to provide stronger buffers against immediate short-term risks. Structural competitiveness and investment efficiency improvements will be essential to ensure that the planned large investment programs translate into growth and export gains as well as increased private inflows into the region.

1. Increased investment efforts have led to a widening of the current account deficit within the last years, with financial inflows not being able to fully keep up with the pace (Figure 1). After expanding by 4 percent of GDP to 11.6 percent of GDP in 2013, the trade deficit is projected to stay above 10 percent of GDP in 2014. Increased capital imports for necessary infrastructure investments (Côte d’Ivoire) as well as investments into the extractive industry (Niger and Benin) have been driving this trend to a large extent. The current account deficit decreased to 7.3 percent of GDP in 2014, down from 8.1 percent in 2013, mainly on account of more favorable terms of trade. Capital and financial inflows into the region have also increased, with FDI and concessional loans remaining stable sources of financing and two WAEMU countries having successfully tapped international capital markets in 2014. Gross International reserve coverage has increased slightly, from 4.5 to 4.6 months of extra-regional imports, but part of the current account deficit has been financed through a decline in commercial banks’ net foreign assets.

2. The current account deficit is expected to gradually decline and be fully financed in the medium-term, with some downside risks (Figure 2). In line with a consolidation and re-prioritization of public budgets to investment spending, and helped by a favorable oil price outlook, the current account deficit is expected to decline despite large investment projects envisioned in several countries in the medium-term. Sufficient financial inflows are projected to balance the BOP. However, the outlook is subject to downside risks. In the short-term, a slow containment of Ebola could impact trade and tourism, with severe implications should the disease spread into the region. A decline in non-oil commodity demand and prices, in particular for gold, driven by a slowdown in emerging markets could have a negative impact on several member countries’ trade balances. Tighter external financing condition due to the normalization of advances markets’ monetary policy could impact some countries’ plans to access international markets. In the medium-term, continued fiscal consolidation and a break from the WAEMU’s comparatively modest historical economic growth will be needed to preserve external sustainability (Box 1). High investment efficiency and improvements to the business climate will be essential to achieve this break, to boost exports and to attract private inflows.

External sustainability would weaken in the absence of fiscal consolidation or if growth went back to its historical average.

Based on four methodologies which give a qualitatively similar assessment, the REER appears to be broadly in line with fundamentals (Figure 3).

3. To assess the stance of the current account for the WAEMU as a whole, this note re-estimates the “EBA-lite”2 regression to include WAEMU aggregates (Figure 3, chart 1 and 2). The regression estimates are very similar to the original approach by Chen (2014). The fitted values resulting from this exercise capture the current account deficit dynamics well, but consistently underestimate its size, suggesting that countries with similar characteristics, such as demographics, institutions and size of private and public transfers and fiscal stance, have, on average, experienced lower current account deficits over time.

4. Based on the EBA-lite approach, the WAEMU’s current account stance in 2013 can be decomposed as follows:

in which CA Gap is the current account misalignment, Fitted CA is the predicted value from the regression above and Policy Gap relates a country’s actual policies not only to its optimal policies, but also to the average policy misalignment in the rest of the world.

5. The EBA-lite macro-balance approach suggests that the WAEMU’s REER is broadly in line with fundamentals. Driven mainly by its relative fiscal stance, the WAEMU’s the policy gap is positive which decreases the current account norm to -5.1 percent of GDP. This norm is adjusted further downwards by 0.6 percent of GDP, related to one-off investments in Benin. The current account gap of -2.4 percent of GDP then implies an overvaluation of the REER by 5.7 percent, suggesting that the REER is broadly in line with fundamentals.

6. An assessment based on CEGR broadly confirms these results. The three CEGR methodologies suggest that the real exchange rate misalignment ranges between an overvaluation of 1 to 9.8 percent, and thus provide some ranges around the EBA-lite estimate. As the CEGR macro-balance approach takes a medium-term perspective on fundamentals, it, as expected, suggests a smaller current account gap than that implied by the EBA-lite approach which is based on short-term fundamentals. The current account to GDP ratio which stabilizes NFA at roughly the median level observed for lower-middle income countries, lies at -3.9 percent of GDP, implying a misalignment of the REER of about 9.8 percent. Finally the equilibrium real exchange rate approach implies an over-valuation of the REER 8.9 percent which is almost entirely driven by productivity differences to the rest of the world. Implementing efficiency enhancing reforms will thus be an important driver of external stability (see also note on structural transformation).

7. Gross international reserve coverage in the WAEMU in 2014 has increased slightly in 2014 while commercial banks net foreign assets have declined. Gross international reserves coverage declined substantially since 2010 when it stood at 6.6 months of imports but increased slightly in 2014 compared to 2013 (to 4.6 month of imports, up from 4.5). Gross reserves cover about 40 percent of broad money, and approximately 80 percent of short-term liabilities. GIR coverage of narrow money is on a downward trend but still significantly higher than the floor (84 percent compared to the floor of 20 percent of narrow money) that acts as a warning signal under the zone’s monetary arrangement with France. (Figure 4). Banks’ net foreign exchange position (NFA) has also decreased and turned negative (Figure 5).

8. A reserve adequacy metric suggests that the region’s reserve coverage should increase to provide buffers against typical external shocks (Figure 6). Following the approach by Dabla-Norris et al. (2011), this note estimates the “optimal” level of reserves by maximizing their net benefits. These net benefits depend on the expected cost of a crisis given the stock of reserves, a vector of fundamentals (exchange rate regime, fiscal balance, institutions), the exposure to shocks (terms of trade, external demand, FDI, aid), and the cost of holding reserves (interest rate differential with the rest of the world). The approach suggests about 5 to 12 months of imports coverage for the region depending on the opportunity cost of reserves, implying that the region’s reserve coverage is currently below “optimal” levels, even though this metric does not fully apply for the WAEMU given the commitment of France to back the convertibility of the CFA franc. Given current macroeconomic projections, and assuming no significant change in the CPIA3 rating, projected reserve coverage could stay below these levels even in the medium term.

9. The business climate has improved on average, but remains challenging (Figure 7).4 The WAEMU’s position in the Doing Business ranking has improved compared to the 2014 Doing Business assessment, with half of the regions’ member countries improving their ranking by at least 10 positions. However, all WAEMU countries are still lagging behind African and Asian benchmark groups.5 Access to and the quality of electricity provision, the registration of property, the enforcement of contracts, investor protection and financial access (see also notes on financial inclusion and mobile payments) appear to pose particular challenges to firms and private investors. Relative weaknesses vary across WAEMU countries and sub-dimensions of the rating. E.g., the cost and time to register property is significantly different across member countries, and director liability is largely driving the negative ranking on the dimension of minority investor protection.

10. A thought experiment highlights how the region’s overall ranking would improve if all WAEMU countries caught up in one area to benchmark levels, other things equal. The exercise aims at emphasizing areas in which reform efforts could yield particularly high gains in terms of the relative ranking. To this end, the values of each sub-category of the Doing Business ranking are replaced with better SSA benchmark country averages for each WAEMU which is lagging behind. The results show that simplifications in taxation and registration of property have the largest impact on the average ranking in the region (up to 7 ranks improvement on average per country). Improvements to access to electricity, a decrease in the impediments to cross-border trade and simplifications of tax procedures would yield the highest individual country gains (up to 15 ranks improvement on individual basis).

These indicators should be interpreted with caution because of the limited number of respondents, a limited geographical coverage, and standardized assumptions on business constraints and information availability.

GIR/Months of Next Year’s Imports

(In Percent of Other Aggregates)

(In Billions of FCFA) 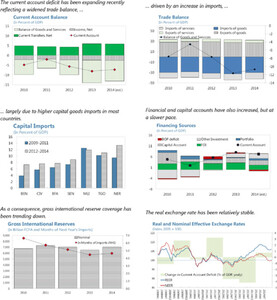 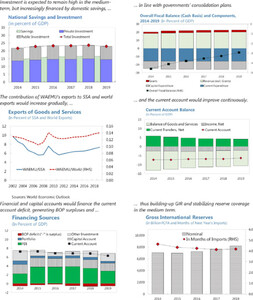 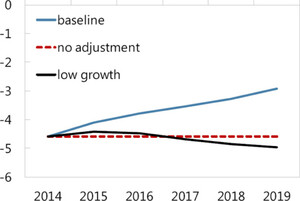 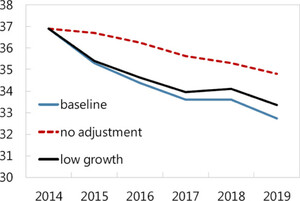 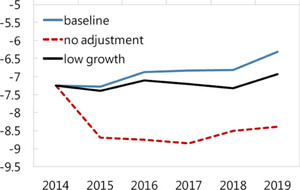 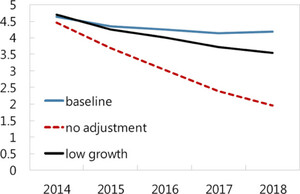 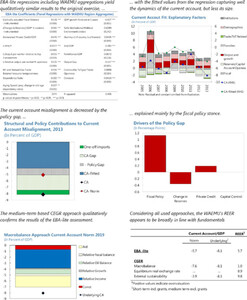 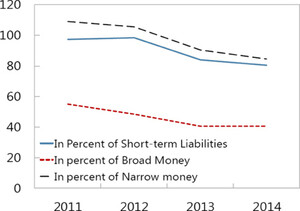 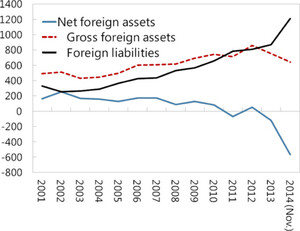 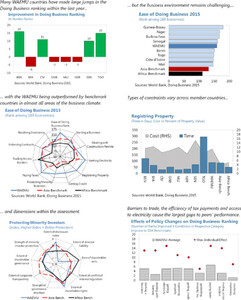