This Selected Issues paper for Seychelles argues that sound fiscal policies and smaller governments can be conducive to growth and help reduce a country’s economic vulnerability. Growth in Seychelles has been volatile and underperformed most small states from 1998 to 2005. Seychelles’s revenues, expenditures, and total public debt are higher after an improvement in 2003. Its fiscal balance has worsened and has been weaker in comparison with most small states for most of the period. Seychelles’s expenditure composition is most similar to that of low-growth small states.

This Selected Issues paper for Seychelles argues that sound fiscal policies and smaller governments can be conducive to growth and help reduce a country’s economic vulnerability. Growth in Seychelles has been volatile and underperformed most small states from 1998 to 2005. Seychelles’s revenues, expenditures, and total public debt are higher after an improvement in 2003. Its fiscal balance has worsened and has been weaker in comparison with most small states for most of the period. Seychelles’s expenditure composition is most similar to that of low-growth small states.

I. Large Fiscal Adjustment in Small States: Lessons for Seychelles1

1. One of the major objectives of the Seychelles authorities’ strategy for 2017 is to reduce public debt to 60 percent of GDP from 146 percent of GDP at the end of 2007. For this to be achieved a large and sustained fiscal adjustment will be needed, as well as a public debt restructuring with a substantial relief component (not discussed here). Following on the 2007 Selected Issues paper,2 this study analyzes the experience of small states in order to highlight the benefits of sound fiscal policies and to derive some lessons for Seychelles from successful large fiscal adjustments.3 Compared to large countries, a flexible fiscal policy is more important in small states for two reasons: first, there is a greater need for countercyclical policy since small states are more prone to shocks, and second, most small states have fixed exchange rate regimes which leaves fiscal policy as the main tool for adjustment. This paper addresses four main questions:

2. The paper first argues that sound fiscal policies and smaller governments can be conducive to growth and help reduce a country’s economic vulnerability. Government in small states tends to be much larger as a share of GDP than in larger countries owing to the fixed cost of providing public services. This poses a policy challenge of containing the burden of government on the economy. Small states that contain the size of government tend to perform better. The paper shows that a large fiscal adjustment underpinned by an economic reform program can support economic growth and the development of the private sector. After analyzing how large adjustments can best be achieved and showing they are frequently frontloaded, the paper demonstrates, based on cross-country experience, that though not common, large-scale fiscal adjustment can be sustained for an extended period (3-10 years). The final section highlights some policy conclusions for Seychelles.

B. Benefits of Smaller Governments and Sound Fiscal Policies

6. Lower fiscal deficits and public debt should make fiscal policy more adaptable for responding effectively to negative shocks. Small states in general tend to be more vulnerable to economic shocks, and their growth is more volatile than in larger countries (Figure 1.2). Because many small states, like Seychelles, have had a fixed exchange rate, fiscal policy is one of the few tools available to respond counter-cyclically to shocks. Moreover, in small states with limited nontradable sectors, the scope for adjustment from exchange rate changes through import substitution and export development is much more limited than in large countries. Small open economies such as Seychelles that have a high essential goods content of imports also tend to have a high pass-through from the exchange rate, so a nominal exchange rate depreciation would largely be transmitted into higher inflation and erode all potential competitiveness gains.7

7. There is some cross-country evidence that a fiscal adjustment, especially a large one, may have an expansionary impact on the economy by improving private investment and consumption (Tsibouris and others, 2006). Expansionary fiscal contractions have been found to be particularly connected with high-debt countries because the risk premium on interest rates declines and confidence rises when government default risk is lower and there is less probability that taxes will go up (Perotti, 1999).

8. This study of episodes of large fiscal adjustment in small states confirms that in most cases growth actually rose (Table 1.1). An episode of large fiscal adjustment is defined as occurring when the average primary balance as a percent of GDP for a three-year period was at least 10 percentage points of GDP greater than the average primary balance for the previous three-year period.8 To limit the impact of exogenous events, adjustment episodes involving oil exporters were excluded starting in 1999, when oil prices began to rise. During the period examined, 1990 to 2004, there were 12 episodes involving nine small states, one of them Seychelles.9 In 67 percent of the episodes of large fiscal adjustment, economic growth increased and the average change in growth was 1.3 percent. In only one episode was average growth negative—in Seychelles during 2003–04—although this coincided with the introduction of the goods and services tax in 2003, which brought a steep rise in the tax burden. Fiscal adjustment is often part of a comprehensive reform effort. In some cases, changes in the political and social environment may have also impacted growth.10

(Percent of GDP, unless otherwise indicated)

There are 12 cases of large fiscal adjustment.

(Percent of GDP, unless otherwise indicated)

There are 12 cases of large fiscal adjustment.

9. The most effective way to achieve a durable fiscal adjustment appears to be to reduce spending. The majority of episodes of large fiscal adjustment in small states involved hefty cuts in both current and capital spending; a rise in revenue was less common and of less magnitude. Moreover, there is evidence that curtailing current spending, especially transfers and subsidies, while holding capital spending steady supports more sustainable and durable adjustments (Daniel and others, 2006).

10. Small-state fiscal data also suggest that reducing current expenditures in goods and services, transfers and subsidies, and wages is associated with higher growth. High-growth small states tended to spend less in these three categories and more on capital projects than medium and low-growth small states.11

12. An examination of periods of sustained primary surpluses in small states shows that, though rare, they can be maintained over a number of years (Table 1.2). Episodes of sustained fiscal tightening are defined as a minimum period of three years during which a country maintained a primary surplus of at least 7 percent of GDP each year.12 During the period examined, 1980 to 2007, there were nine episodes of sustained sizable fiscal tightening involving seven small states, one of them occurring in Seychelles from 1987 to 1992. Moreover, during that adjustment growth in Seychelles averaged 6.3 percent compared to 1.5 percent in the previous six-year period.

13. The experience of Jamaica illustrates that sustained fiscal adjustments may not be sufficient to reduce public debt significantly. In its second period of sustained fiscal adjustment, from 1990 to 2006, public debt in Jamaica rose by about 30 percentage points of GDP because high real interest rates and sluggish growth had a negative impact on debt dynamics. In addition, the durability of the fiscal impact was undermined by weak revenues and spending pressures on the high wage bill and on security. More structural reforms were needed to broaden the tax base, and reform public enterprises to limit the debt burden emanating from off-budget entities.13

14. A large adjustment is often frontloaded, can be sustained for a number of years, and can underpin growth especially if it is embedded in a comprehensive reform program. Low debt and a healthy fiscal position will give policymakers the flexibility to react effectively to shocks. Small states that have relatively smaller governments and lower public debt tend to grow faster. By crowding in private sector investment in small states, fiscal adjustment can thus support growth.

15. The analysis above suggests several implications for Seychelles:

This paper builds on work from Working Paper 08/39 which should be referred to for more information on the size of government and debt in small states.

For an overview and definition of small emerging-market and developing states and large countries used in this paper, see Appendix I.

High-growth small states as a group have seen a rise in average revenues and grants from 2004 to 2006, but this was largely due to the Maldives, where revenues and grants rose from about 34 percent of GDP in 2004 to 60 percent in 2006 after the Indian Ocean tsunami mostly due to large official grant inflows.

High-growth small states in the sample are defined as the 11 countries that enjoyed the highest growth rates on average from 1990 through 2006. They are Bahrain, Belize, Bhutan, Botswana, Cape Verde, Equatorial Guinea, Estonia, Maldives, Mauritius, Qatar, and Trinidad and Tobago. Low-growth small states are the 11 countries that had the lowest average growth rates for the same period. The low-growth states are the Bahamas, Barbados, Comoros, Djibouti, Dominica, Gabon, Guinea Bissau, Jamaica, Micronesia, Slovenia, and Tonga.. The 20 states in the middle include Seychelles.

Using data from 2004 to early 2008 for Seychelles, econometric models estimate a pass-through range of the nominal effective exchange rate (NEER) of -0.7 to -1.0. In other words, a 1 percentage point NEER depreciation is associated with a 0.7 to 1.0 percentage point increase in inflation.

Two of the episodes were for two-year periods.

See Appendix II, Table A2, for the list of countries that experienced large fiscal adjustment and for more details of the episodes.

For example, during 2003-04 in the Solomon Islands the fiscal adjustment coincided with an improvement in security, which had a positive impact on the large pickup in growth.

Note that we did not test for causality; many of the high-growth small states are resource-rich countries. However, there are studies that suggest there may be a resource curse on growth (for example, Sachs and Warner, 1995).

Again, to minimize the effect of exogenous events, adjustment episodes involving oil exporters were excluded starting in 1999 when oil prices began to rise.

Given the small size of the economy, one or two projects could change the figures significantly. With estimates for 5-star hotels to be built between 2008 and 2012 ranging from US$58 million to US$1,300 million, starting up just one more project could cause total single-year FDI inflows to more than double.

Produced by the Financial Times group, fDi magazine is a publication for global business (www.fdimagazine.com/news/fullstory.php/aid/2098/African_Countries_of_the_Future_2007_08_html). According to fDi’s analysis, Seychelles also has the highest level of adult literacy, one of the best government-initiated professional skills programs, and one of the best telecommunication networks in Africa.

Moreover, the government spent almost 1 percent of GDP on subsidizing the Seychelles Tourism Board.

Chai and Goyal (2006) found that in the Eastern Caribbean Currency Union, where tourism is also strong, reliance on tax concessions is high and tax revenues forgone range from 9½ to 16 percent of GDP annually.

Apart from some fish, beer, and soft drinks, bottled water, and local fruit, all food and beverages are imported.

Utilities and fuel are now required to be paid for in hard currency.

Growth and Fiscal Indicators in Small States and Seychelles, 1990—2007

(In percent of GDP) 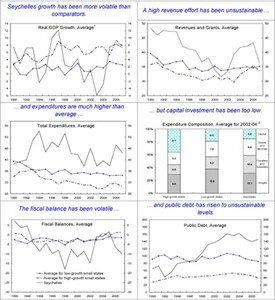 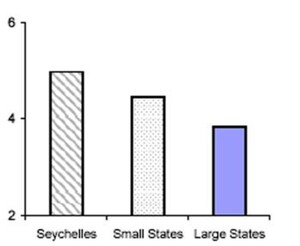 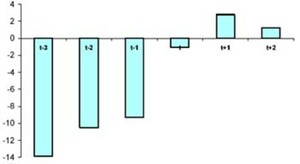 Details of Episodes of Large Fiscal Adjustment in Small States