This Selected Issues paper analyzes economic growth in Iran. It uses a growth-accounting exercise to quantify the historical sources of growth over 1960–2002, including human capital accumulation and the contribution of Total Factor Productivity to growth. The paper presents an empirical study to quantify the role of several other contributing factors commonly discussed in the cross-country growth literature, including macroeconomic stability, financial development, trade openness, and the change in the terms of trade. The paper also examines issues in medium-term management of oil wealth in Iran.

This Selected Issues paper analyzes economic growth in Iran. It uses a growth-accounting exercise to quantify the historical sources of growth over 1960–2002, including human capital accumulation and the contribution of Total Factor Productivity to growth. The paper presents an empirical study to quantify the role of several other contributing factors commonly discussed in the cross-country growth literature, including macroeconomic stability, financial development, trade openness, and the change in the terms of trade. The paper also examines issues in medium-term management of oil wealth in Iran.

Chapter I: Economic Growth In The Islamic Republic Of Iran1

1. Iran faces the challenge of increasing its growth rate to reduce unemployment and improve the living standards of its population over the medium term. Growth performance in recent years (6 percent during 2000–03) has been satisfactory, and was driven by major economic reforms as well as by transitory factors, such as high oil prices and expansionary fiscal and monetary policies. Questions about the determinants of growth in Iran and the long-term sustainability of relatively high growth rates arise. Given that past experience shows that the Iranian economy can grow at relatively high rates over an extended period, a first step is to examine the historical sources of growth and discuss the relevance of various contributing factors for the medium term. The second step is to provide an analytical framework for the formulation of growth-enhancing policies.

2. This chapter uses a growth accounting exercise to quantify the historical sources of growth over the period 1960–2002, including human capital accumulation and the contribution of Total Factor Productivity (TFP) to growth. The chapter also presents an empirical study to quantify the role of several other contributing factors commonly discussed in the cross-country growth literature, including macroeconomic stability, financial development, trade openness, and the change in the terms of trade.2

3. The empirical studies on the determinants of growth can be broadly divided into two main categories. First, growth accounting exercises, which consist of estimating contributions to growth of basic factor inputs—labor, physical capital, and human capital—and a residual that captures the efficiency at which physical and human capital resources are used, or TFP. Second, several empirical studies analyze cross-country growth regressions to find the relationship between different explanatory variables and growth.

4. Some stylized facts arise from the cross-country growth regressions. The most relevant in the case of Iran are:

5. In the case of Iran, the analysis covers a period of 42 years (1960–2002), which witnessed significant political and social changes as well as periods of instability (1979 revolution, the war with Iraq, economic sanctions, etc). The analysis in Section IV shows that:

(In percent, average for the period)

(In percent, average for the period)

7. A standard growth accounting framework is used to discuss the historical sources of growth in Iran. We use the following Cobb-Douglas production function:

where Y, K, and H represent output, physical capital, and human capital respectively, a represents the contribution of physical capital to output, and t is an index for time. The term A represents TFP, or the efficiency at which the economy operates, which depends on factors such as domestic political and international environment, the legal and regulatory framework, the creation and diffusion of more efficient technologies through international trade or foreign direct investment, and the effect of structural reforms such as financial sector or labor market liberalization. Physical capital is considered as a homogeneous capital good, with no distinction made between equipment and non-equipment capital goods, or between private and public capital goods (implicitly assuming that the productivity of the two types of capital is the same).5

8. To account for the effect of education on economic growth, a human capital index is constructed as a function of both the labor force and its average years of schooling. However, in Iran it is difficult to measure the contribution of schooling to human capital because of the lack of an education quality index that would account for the changes in the productivity of education during the 1960–2002 period.6 Therefore, the paper considers two different specifications of human capital, which result in two different growth accounting exercises.

9. A basic specification of human capital is to equal human capital to raw labor, that is, Ht = Lt. Under this specification, an increase in the average years of schooling of the labor force does not increase the productivity of labor. Given that the cross-country empirical evidence points to a positive effect of education on the productivity of labor, under this simple specification, the contribution of TFP to growth is overstated because it implicitly takes into account the effect of the quality of the labor input on output and growth.

10. A different assumption is to consider that schooling increases the productivity of the labor force along the following specification of human capital (Lucas, 1988):

11. The above specified production function implies that human capital accumulation exhibits increasing returns to scale. This means that, if we double both the number of workers and the average education years of the labor force, then human capital increases four-fold. Since some evidence—such as the increased proportion of college graduates with non-marketable skills—points to a reduction in the quality of education in Iran over the period under study, the growth accounting exercise using this technology specification may result in an overstatement of the contribution to human capital—and an understatement of the contribution of TFP—to growth.

12. Taking natural logarithms and differentiating with respect to time, the following decomposition of growth is obtained:

where g denotes the growth rate of the variable in the subscript. If factor markets are competitive, the first-order profit-maximizing conditions for the firm imply that a corresponds to the share of rental payments to capital in total income, that is, α = (r-d)*K/Y, where r is the net rate of return on capital and d is the depreciation rate of capital. The derivation of the time series of the capital stock and the data sources are presented in the Appendix.

13. The results of the growth accounting exercises under the two alternative specifications for human capital (Ht = Lt. and Ht = Lt et) are shown in Tables 1.3 and 1.4, respectively.

14. The non-inclusion of the effect of increased schooling on the productivity of the labor force and growth results in a positive contribution of TFP to growth during the 1969–2002 period because changes in the quality of the labor force are implicitly included in TFP. Under the alternative specification, which considers that human capital increases linearly with the average years of schooling, the growth accounting exercise yields that the contribution of TFP to growth becomes negative (minus 1.2 percent on average during the 1960–2002 period) (Table 1.4).

16. This section focuses on the empirical relationship between non-oil GDP growth and some factors commonly referred to in the literature as having a significant effect on growth performance, namely trade openness, macroeconomic stability, terms of trade changes, and financial development. Given the importance of changes in oil production and political developments in Iran, the empirical analysis also includes these two variables.

17. To examine the link between trade openness and economic growth, we adopt the imports to non-oil GDP ratio as a proxy for trade openness because of the lack of data on average tariffs and nontariff barriers to trade for the entire period 1960–2002. Macroeconomic stability is proxied by the inflation rate, due to the lack of data on government deficits and exchange rate distortions for 1960–2002. Terms of trade are proxied by the change in the ratio of oil prices to the import prices of industrial goods. Since oil represents about 80 percent of Iran’s exports, and 95 percent of imports are industrial goods, the ratio of the prices of these two types of commodities is a good proxy of the terms of trade. Financial development is proxied by the change in the ratio of broad money (M2) to non-oil GDP. Finally, we include a dummy variable for the sub-period 1977–88 to take into account the effect of political instability and war on growth.

18. Using the econometric package PcGets, which allows for an automatic reduction of a general model to a parsimonious one, we establish the following empirical relationship between non-oil GDP growth and its explanatory variables (Table 1.5).

19. The statistics of the regression show that all variables are significant at the 95 percent confidence level, and explain 82.7 percent of variance of growth; there are no structural changes during the period (Chow tests); no autocorrelation (AR test); and there is no heterocedasticity (ARCH and hetero tests) of the residuals of the regression.

20. The above results are largely consistent with the cross-country evidence on economic growth. Increased trade openness and macroeconomic stability (measured as a reduction in inflation rates) are positively correlated with growth. Also, improvements in the terms of trade are positively correlated with growth. Higher oil production stimulates non-oil GDP growth through higher demand of inputs from the non-oil sector and because higher oil revenues stimulate public expenditures, particularly public capital expenditures (see Chapter II on fiscal policy). Of all the variables studied here, political instability and war has the strongest (negative) effect on growth, reducing growth by about 6 percentage points per year during the 1977–88 sub-period.

21. The main difference with the cross-country evidence in other studies concerns the negative effect of financial deepening (measured by the change in the M2 to non-oil GDP ratio) on growth.8 Since there is some cross-country evidence on the positive effect of financial deepening, and the contribution of TFP to growth in Iran is very small or even negative, the lack of positive correlation between financial deepening and growth could be attributable to an inefficient financial system that channels resources to investments with very low productivity or to those sectors with lower growth potential.

22. During 1960–2002, the industrial sector exhibited the strongest performance. Industrial output (mostly, manufacturing and construction) grew at 7.6 percent per year on average and was 23 times higher in 2002 than in 1960. As a consequence, the share of industrial output to GDP increased during this period from 7 percent to 25 percent. In contrast, the oil sector grew by just 2.5 times, and its relative weight decreased from one third of GDP at constant prices in 1960 to less than 13 percent in 2002. The output in the agricultural sector grew at 4.2 percent on average, a slightly slower pace than GDP, but well above the average population growth of 2.6 percent, while the services sector grew at a faster pace than GDP (5.4 percent per year on average during the period).Table 1.6 shows the average growth rates for each sector:

24. Three main policy lessons could be derived from the Iranian growth experience:

Since the relative price of oil GDP increased by an average of 3 percent per year during 1960-2002, the ratio of nominal oil GDP to total GDP increased from 12.8 percent to 22.1 percent, even though real oil output increased at a slower pace.

This assumption is made because of the difficulty to measure the productivity of public capital goods in Iran.

Other proxies of the quality of human capital, such as the increase in productivity of workers—measured by their relative salaries, presumably reflecting relative education attainment—are not available in Iran.

With alternative specifications of the model, such as using changes in real money, the relationship between financial deepening and growth becomes statistically insignificant. 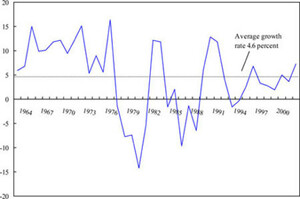 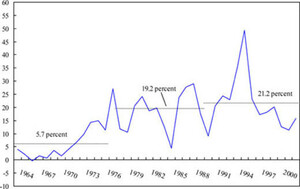 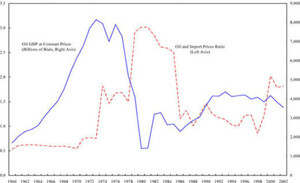